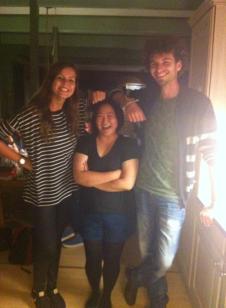 Hanging out with your everyday 180cm girl and 195cm guy, y’know.

Today I met another girl who is 180cm tall – I really am in Holland! By now I’ve met so many tall Dutch men that 195cm is sounding like the average man, but tall women are still amazing to meet. She talked of the terrible growing pains she had, of wearing sneakers all the time for her boyfriend even though she loves high-heels, and about having to fit in strange ways to be able to sit on the metro.

The first really tall person I’ve met was my cousin’s cousin who is 193cm, and who at that time was really into wearing New Rock Boots (which add 5cms). This was back when I was visiting Holland ten years ago, in 2004! When I met him he was also standing on the top of a couple of stairs, so the visual impact was considerable… Our conversation today opener today? “You’re still really tall!” “You’re still really short!” Closing sentence: “Maybe we see each other in ten years again?” “Yep, and maybe you grow a little bit taller then!”

Yesterday I met a woman who was also about 180cm tall, or slightly higher. I said: “My god! You are tall!”, to which she replied: “Well, you are….(looking for words to say) not so…tall?” I also went to shop for flat shoes in Amsterdam with my cousin. To my disappointment, the flats the stores stocked were very boring and monotone, which my cousin explained was because since all women’s sizes usually started at 39 (I’m a 36), no woman wanted flats because it would make their already big feet look flatter and bigger. Most Korean women wear flats or heels up to 7cm, very rarely do they wear kill heels since that would make them as tall or taller than the men there. And we’re hardcore into flats, oxfords, you name the colour and pattern, and we have it!  Sexy ones! Cute ones! Avant-garde-pattern-thingy-ones! But nope, not here in Holland. Not popular at all.

Anyway, the 195cm-guy in the picture above talked about how he travelled in Africa and kept banging his head onto low-hanging roofs (I have lived my entire life never having to bend down at places which say “Watch your head”). There was a student from Maastricht who was on exchange at my university – he was well over 190cm, and eventually had to sleep on the floor because his legs would stick out from the mattress a long, long way. He also couldn’t fit his legs under the university’s tables and desks so had to constantly stretch them out, but had to do it sideways because there were other Asian-scaled tables in front of him in Asian-ergonomic gaps, which would of course result in him tripping the people passing by on the walking paths. Not to mention he could not find pants or shoes that fit him here.

The Dutch were also very interested to know, are the sinks, cupboards, shelves, and so on would be lower in Korea? Yes, yes. Double check. Yes. I’m having trouble washing my face every morning because the house of my cousin and her family is fitted to the average Dutch – who are a good 10cm taller taller than me (minimum). My aunt lives in a house which is even high for Dutch people – it was tailored for a 200cm-tall man!

My cousin once worked at a café in Amsterdam Station. She had an Indonesian coworker who was about 155cm tall, and as a result the entire café started folding the cloth napkins two times instead of three so that she could reach the top of the pile. Point of the story? The coworkers started folding the napkins differently.

I’m getting a better sense of but still trying to get a (metaphorically speaking) bigger picture  of the hows and whys of the Dutch. It’s through these dialogues that the puzzle pieces start coming together.

So, all in all, #ShortPeopleProblems & #TallPeopleProblems. Also, I see problems creeping if I ever want to move to Holland.