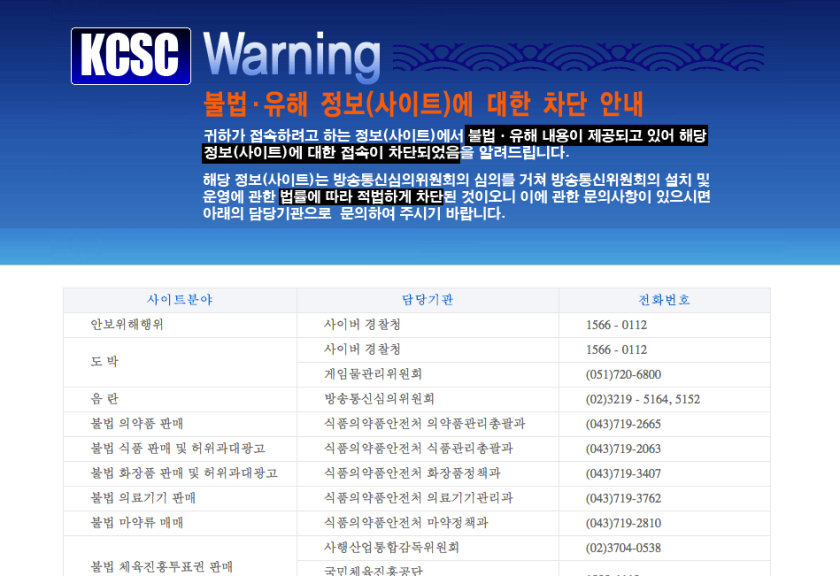 The pop-up screen from the National Police Agency

Early March, I went to a launch party for an NGO called Arirang Institute. It’s mostly Americans and some Koreans working on cultural and reunification studies.

One of the founders, Mike, who is studying for a PhD at the North Korean Studies University in Seoul, told me that the library does have all those books from North Korea (about Kim Il-sung and Kim Jong-il’s ideology, propaganda textbooks, and such) but no one is allowed to bring the books out or make personal copies – they can only read them at the library.

One of the qualifications for a democracy is freedom of press. Korean media is heavily censored even today – music, films, books, the internet, and so on. In the eighties, when my parents were at university, texts  by Karl Marx, among many others, were banned. Even today, the Ministry of Defence keeps a list of “Anti-governmental” books (most recently updated in 2011), which I discussed earlier in “Why Korean Soldiers Are Banned From Reading Chomsky and Ha-joon Chang”

In South Korea you can legally report a person for being communist. Over 40,000 calls were made to 111, the hotline for reporting crimes such as Espionage, Communist Propaganda, and Terrorism (Hankyoreh). Unified Progressive Party (UPP) leader and 2012 presidential election candidate Lee Jung-hee has caused heavy criticism and public hatred for saying “the South government” instead of “the Korean government” (the South does not recognize the North as a legitimate government but as an illegal occupation of the peninsula, according to the Constitution). Earlier this year, National Assemblyman Lee Seok-Ki from the UPP was taken into custody and sentenced to 12 years in prison for being a “NK Sympathizer” and planning a “Revolution”.

So I’ve talked about North Korea and people getting caught for being communist.

Most keywords leading to adult content are blocked and censored, both on Naver and Google Korea. Both sites will ask you to certify that you are over 18 years old by providing your National Identity number and name. Buying adult products, such as erotica-type magazines like Maxim (similar to Playboy), condoms or sex toys also requires the same process, at all online and offline shopping malls.

In 2006, A certain Mr. Kim (dubbed “King Kim” by the Korean public) was taken into custody and charged to 2 years in prison for distributing over 14,000 files of pornography on the Web. These arrests have continued, the most recent arrest being that of a couple who uploaded 200,000 files and made over 70 million KRW, or 70,000 USD (TV Chosun).

In addition, cultural products and services undergo authorization from the Korea Media Rating Board before they can be released to the public. This is why Lady Gaga‘s 2012 Monster Ball performance in Seoul was banned for audience aged under 19, although this is the first instance of such a case since Marilyn Manson’s 2005 concert.

Similar instances include TVXQ‘s “Mirotic” (2008) – labelled +19 for its lyrics “I got you under my skin“, which the Board interpreted as describing a sexual position;, and the film Shortbus (2006) being suspended from public release for three years until, finally, it opened at cinemas in 2009 for adult audiences.

However, censorship of cultural products and pornography isn’t taken seriously by the public, since there are so many ways to reroute one’s IP, and because a new site pops up when another is shut down. Koreans illegally download everything from music, film, to pornography, just like the rest of the world. It’s just an inconvenience that people like to laugh about.

Edited, May 23rd, for minor errors.