Founded on August 6th, 2015, the independent website Megalian.com brands a new type of feminism – one that uses the country’s world-class ICT infrastructure to promote gender equality and to humorously bash misogyny on the Korean web.

The name, currently filed for trademark registration by one of its users, is a neologism combining ‘MERS gallery’, the web forum where the movement was born, and ‘Egalia’, of Gerd Brantenberg‘s satiric novel ‘Egalia’s Daughters‘. Megalian.com operates strictly on an anonymous basis, with all members posting under the same nickname, except for notices regarding server maintenance by the site’s administrators, who nevertheless remain anonymous (As of December 2015, the few interviews conducted with its members or admins have not revealed any personal information).

The collective movement began in June 2015, when women began to ‘mirror’ the misogynic comments made by male members on DCInside.com, a popular web forum. What was conceived as a minor page dedicated to sharing information on MERS-CoV, the Middle East respiratory syndrome coronavirus, turned to a battleground between the sexes. Male users began launching hate speech on two Korean women affected by MERS who, due to miscommunication, did not comply to the South Korean government’s call for quarantine. Women fought back, parroting back male users’ comments by simply replacing the words ‘women’ with ‘men’, a tactic they actively promote as ‘mirroring‘.

Megalia’s members, who call themselves ‘Megalians’, have since created a stir in the Korean media. Opponents call them men-haters and accuse them of fighting hate back with hate – that these women have gone too far. This is precisely the point, Megalians say. To see the misogyny that is today taken as acceptable social behaviour and spat at Korean women every day: to turn it around so men and women alike can witness it in its honest, raw form – discrimination.

At the moment of its conception in August, the site had 170,000 unique visitors (data by similarweb.com). This number has continued to grow, adding another 100K almost every month. The November stats stand at 370,000. About 83% percent of its visitors log in from tech-savvy Korea, while 10% hail from the US, and smaller numbers from Canada, Japan and New Zealand (a portion of users are also based in European nations).

About a quarter of its traffic stems from referrals – most notably from Ilbe.com, a website whose members have been Megalia’s target of criticism and vice versa since the movement began at DCInside.com . Ilbe, a site dedicated to sharing humour whose political stance leans towards the extreme right, has continuously faced accusations from the general Korean population for its largely unmoderated content – much like 4chan in the rest of the world. Its notoriety stems from members’ ad hominem attacks targeting specific groups, such as women and Koreans originating from Jeolla province. Users have been sentenced for using the terms ‘fish cake’ and ‘barbecue meat’ to mock the hundreds of civilians deceased in the 2014 Sewol ferry incident and the 2003 Daegu subway fire.

Megalia’s logo reflects its satiric nature, heavily influenced by the Feminist novel ‘Egalia’s Daughters: A Satire of the Sexes‘ by Norwegian author Gerd Brantenberg. In the influential feminist oeuvre, Brantenberg narrates a world where gender roles are entirely reversed – linguistically (women are called ‘wim’ and men ‘menwim’, making the man the suffix), socially (women are by default given the upper hand at the home and in society due to their power to give birth), and sexually (men are at constant risk of sexual assault; the blame is entirely theirs and not of their assailant). The logo symbolises Korean society’s – notably of men – highly judgemental attitude towards women’s physical appearance and mirrors the obsession with women’s sexuality by mocking the size of South Korean men’s penises – ‘they are just not good enough‘.

The satire and humour culminated in the creation of a Megalian dictionary as well as the parody of a popular Korean comic targeted at young children learning basic classical Chinese characters (all the characters are reinterpretations of the letter 男, which means ‘man’).

Popular Megalian vocabulary and expressions include references to social problems caused by Korean men as well as mirrors of derogatory terms used by men on sites such as Ilbe:

Although men are the main target of Megalian mirroring techniques and retorts, women receive criticism as well. These women – dubbed ‘corseted’ (after the restraining fashion device) or ‘Penis Emeritus’ are, however seen as a product of the male-dominated society, who must break free from the social injustice by individual will (by joining Megalian, of course). It should be noted that almost all Korean women are understood as having undergone a ‘corseted’ phase at some time in their life, as it is a social norm implemented on even the most Feminist children.

The site is currently working extensively on exposing Soranet, Korea’s biggest pornographic website (over a million users are currently registered) and whose claim to fame lies on its ability to keep avoiding legal consequences by constantly changing domains names and servers, effectively placing it outside the jurisdiction of South Korean law. (You can read more about Soranet and Korean women’s battle against their illegal activities in an upcoming post)

Megalia also played a detrimental role in the 2015 Maxim Korea scandal. In its September 2015 issue, MAXIM Korea’s cover depicts the images of a naked woman’s feet dangling out of a car boot, with the slogan “This is what a real bad man is like. How do you like me now?”.  The photoshoot goes on to show the images, most likely of the assumed female victim in the boot, looking up at the assailant, then being dragged in a plastic body bag. The magazine took a defensive stance at the accusations, and only issued an apology after international media and a spokesperson for MAXIM US condemned their actions. 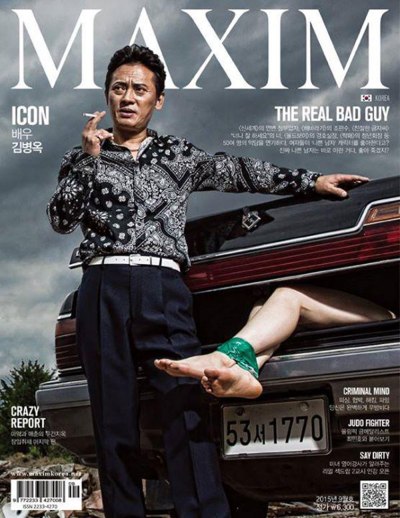 Other activities Megalian is collectively responsible for include:

As of December 25th, the site is running several funding and media campaigns. A YouTube channel dedicated to providing information on hate crimes in Korea uploads videos with English, French, Japanese, Mandarin, and Spanish subtitles.

However, the site is not without trouble. In early December, a debate regarding whether or not the site should support gay men’s rights (the site is supportive of female members of the queer community). Members argued that should not be exempt from criticism, as they are also part of the Korean male community which they target for mirroring. The administrators ruled that members should not use derogatory satiric terms to refer to gay men, which resulted in a massive exodus. Womad, an alternative to Megalian.com was proposed, but as of December 25th, no site has been launched and its Daum forum has been made private [Update July 22nd, 2016: Still no website; Daum forum running].

Since the December exodus, several sites pretending to be an alternative to Megalian.com have popped up, taking advantage of the confusion and luring Megalians to join or to visit them. However, few Megalians have actually joined them, as they were warned beforehand on the forums.

Men, mostly from rival site Ilbe, have also been vandalising and lurking on Megalia, a site dominated by female users (including transgender and transsexual women). As Megalia operates on a strict anonymity basis and insists on an easy-to-join-and-leave policy, there is no way to block users based on any information.  Korean web portals such as Naver and Daum require users to provide their national identity number (replaced with Web ID in 2014), which allows admins and moderators of forums to restrict membership based on age and/or gender – but take away any chance at anonymity.

This anonymity is both Megalia’s advantage and drawback, since it guarantees full freedom of speech to members while diminishing the ease of blocking users. A few members have been blocked through IP tracking, however, in general, the admins do not moderate the posts and only issue warnings if several reports have been filed against it.

Since December 2015, administrators and financial backers of the website have continuously received criticism on their lack of transparency, but no official statement has been released.

Update: As of May 2016, most users have migrated to either the radical WOMADIC (Daum cafe) or to the softer LADISM (Daum cafe). No official statement has been issued by the team behind Megalian.com.